For my second prototype, I designed a visual from the data I collected on Israeli settlements in the West Bank, as well as the surface area of the enclosed space and mapped the information spatially on the geography of the United States.

I was able to retrieve the settlement data from the Foundation for Middle East Peace (FMEP), an organization that compiles reports and data on the Israeli-Palestinian conflict, and B’tselem, an Israeli human rights NGO that collects data on settlements. Below is a screen shot of the settlement information compiled in a chart by FMEP.

My goal is to visualize the elements of the Israeli occupation of the West Bank and violations of international law, like the separation wall, Israeli settlements, and checkpoints, take them out of the context of the Palestinian-Israeli conflict and map them spatially on the United States. I started with a rough sketch below and in the process of building a fictional narrative behind it to create a dystopia that the American audience can relate to, alluding to the laws violated by the Israeli government. 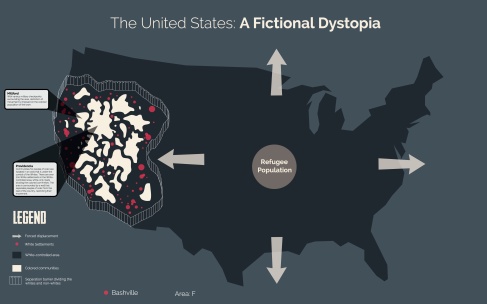 The first prototype for my Mini Thesis is a map of the world with a collage of cut-up arrows originating from historic Palestine, pointing to other countries on the map. This mock-up is meant to represent the of the dispersed refugee population in across the globe, as a consequence of the Palestinian-Israeli conflict that started in 1948. This could eventually be turned into a web platform where Palestinians in diaspora can input the current city they live in and where they are originally from in Palestine, and the system can generate an arrow based on the geographical data.

Data visualization on social justice issues, particularly in Israel and the West Bank, is a domain I’m deeply interested in researching and creating a project that could reach the widest audience possible. Most of the projects I’ve seen around this issue address the problem as a local one, without relating it to the target audience. My interest, however, lies in relating the current social and political situation in Apartheid Israel, and applying the segregation laws to The United States’ current policies.

I want to shock people, and create a situation that is outrageously discriminatory, and seem unrealistic in the context of the US but the reality in Occupied Palestine. This concept, for sure will make my project controversial, which could defeat the purpose of informing people of the situation. The funny thing is, when I was thinking of how all the existing racist policies that exist in Israel how apply to the US, I realized most of these policies, or at least similar ones, exist or did exist at some point in America.

Essentially, I want to create a site with interactive visuals that users can engage with and click on to lead them to information about particular topics of interest.

An online initiative that continuously inspires me is the Visualizing Palestine. They do data visualization projects for social justice, often dealing with issues of injustice in Israel and the West Bank. They target audience, similar to mine, is a Western audience, so what’s interesting about a lot of their projects, is that they are relatable to people who are continents away from the conflict. They use references such as Central Park and the Annual rainfall in London to map human tragedies in a more relatable way. They also cite their data sources, which could be useful for me. More of their work can be found here.

Another person’s work that I feel relates to my idea in many ways is Navit Keren, an Israeli student who graduated last year from the D+T program. Many of her projects revolved around visualizing the Israel-Palestine conflict through info graphics and data visualizations. More information about the project can be found on her website. 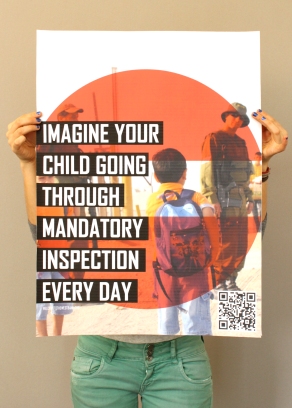 Data visualization is a powerful new medium that takes information and maps it in a way that simplified and more easily understood by the masses. It is up to the designer to create his/her own narrative around the data. I would like to use this medium to display quantitative data that is shocking, compelling, and tells a story.